Frog Blog Entry #1: The Green Tree Frog in the Kitchen is My Friend!

It’s nearly Christmas and I made a green friend! I’m in my gross, hot, humid hometown and we have NO AIR-CONDITIONING because my mum’s insane but there’s a frog in the kitchen. Ever since I arrived last week he’s been sitting in exactly the same spot—not quite on the sink, but next to it. Mum said when he first appeared he looked very sick but now he’s much better. She thinks he might be blind so we might have to take him to the Frog Lady. 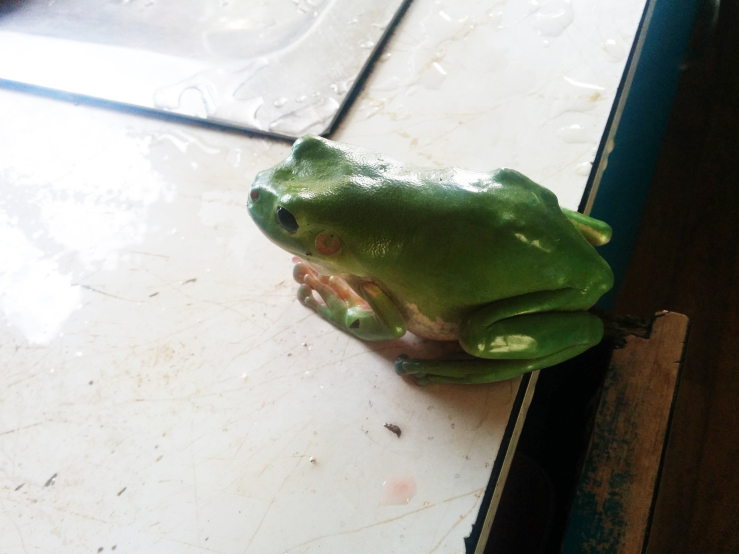 Yesterday we fed him a beetle and he seemed very pleased about that. I’d like to take him back to Melbourne and have him sit on the sink or in the shower because I don’t have any pets but I doubt you can take frogs on the plane.

Some people keep GTFs as pets instead of a cat or a dog. I know you can’t pat or hug a Green-TF, which is problematic because I love touching things that I like and I get frustrated if I can’t. Ideally I’d just have him sitting on my shoulder all the time, like a parrot. Hopefully he’ll stay in his spot so I can still talk to him while I make gingerbread. 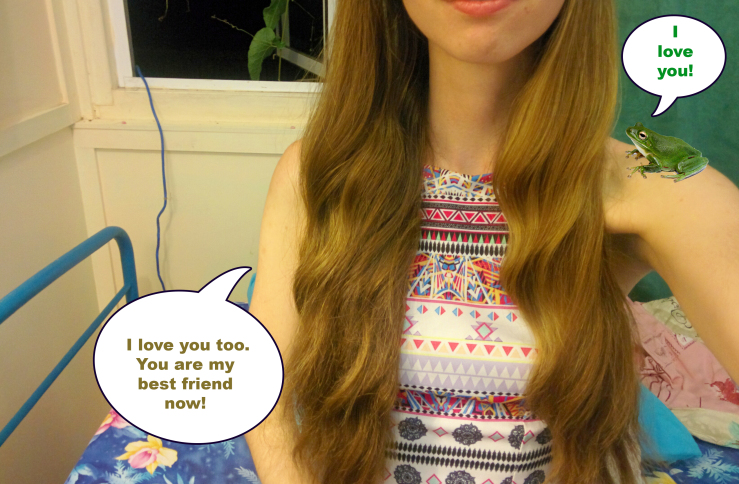 Naturally this whole experience has inspired me to learn more about Green-TFs. There’s a book called The Cold-Blooded Australians, which was on one of my dad’s old bookshelves. Reptiles, fish, amphibians—it covers the lot! I like amphibians best at the moment but some fish are pretty nice and heaps of snakes look cool. We saw a snake cross the road. 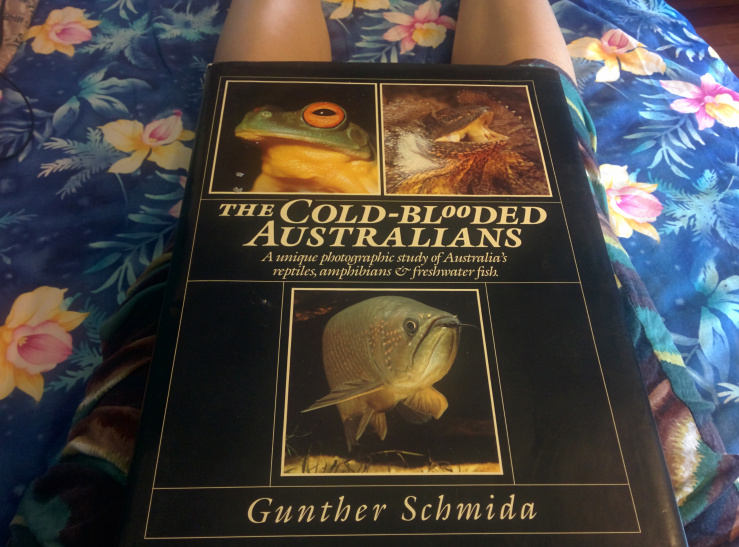 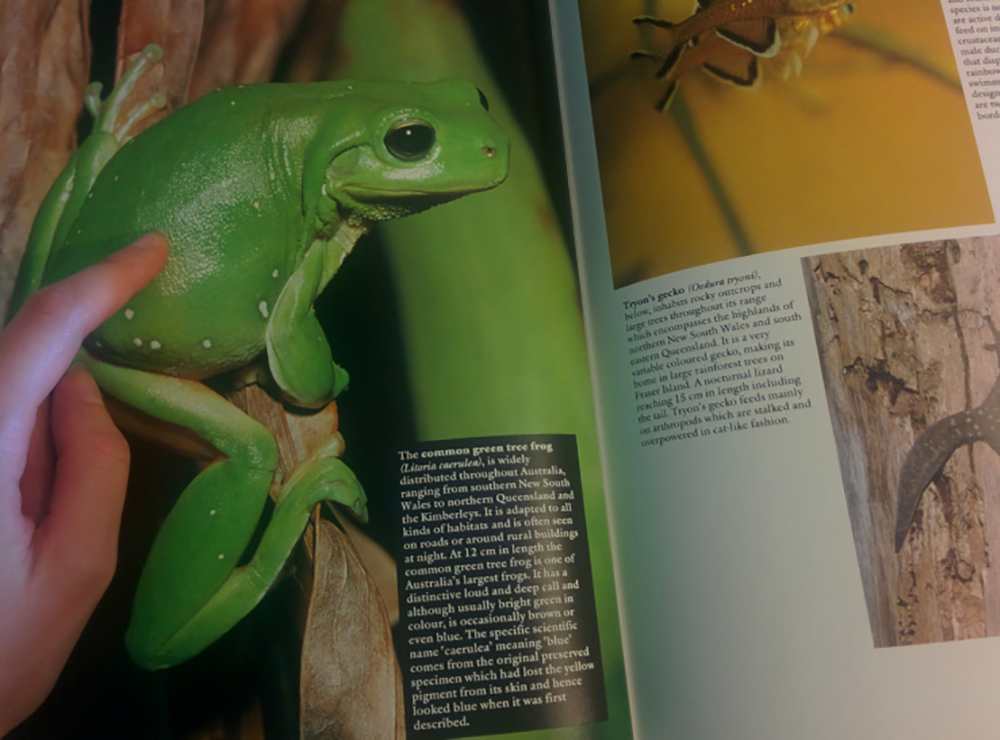 Probably the most interesting thing is that GTFs change colour. My GTF is leaf-green, but I’ve also seen Green-TFs around that appear almost brown. There’s a huge olive-coloured friend that hangs around outside. I don’t visit him as much because he’s a bit scary, but I still like him. I probably wouldn’t put him on my shoulder though. Or maybe I would.

Thinking about the GTF’s colour-changing powers reminded me of when I went with my mum and my brother a few months ago to a bird-watching lookout—a dingy little cement structure sheltering heaps of frogs. Some of the froggies were green and some were brown. Now I’m wondering if they were all GT-Frogs. 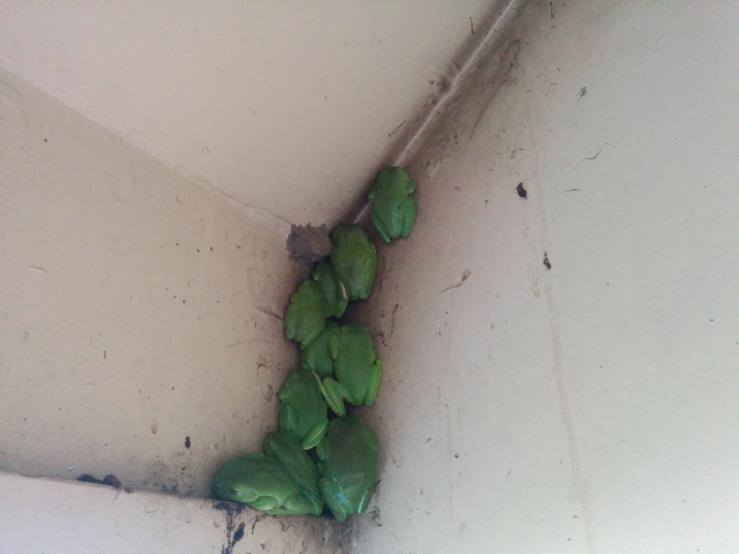 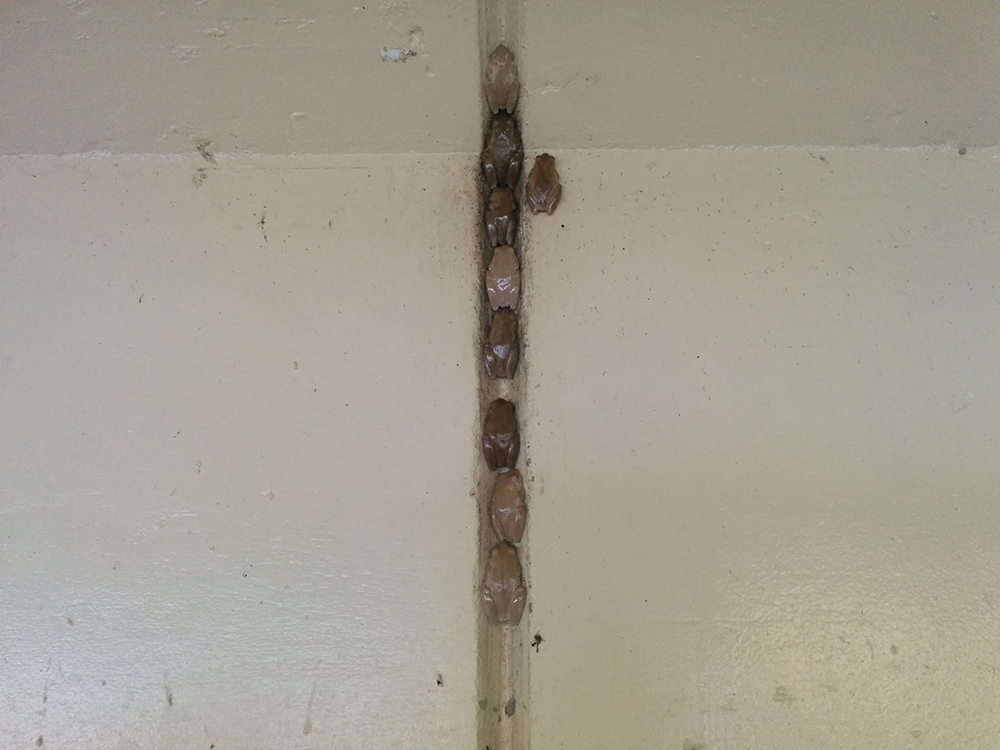 I mean that’s not just poo-green or olive green—those are some serious, full-on brownfriends. I don’t think they’re Brown Tree Frogs though, because BTFs have markings on them and these are fairly monochromatic frogs. If anyone is able confirm the type of frogs in the second picture, please write to me in the mail. I can’t put my address online though.

One thing’s for sure: the brown frogs have got things sorted, except for that one random friend near the top. Those green froggies on the other hand are all higgledy-piggledy. I don’t know what any of this means or if it’s even important but I feel like it’s quite important.

I love my green frogfriend. I love him so much! Please stay for Christmas and also New Year and then come back to Melbourne and live in my shower.