Officially Normal from Friday the 29th of January + Apology to the Rat-Mouse + Housewarming Rooster Calendar (Thanks, Mum!)

This is an announcement to tell the internet that I will officially be acting 100% normal from Friday the 29th of January, 2021. I would have made it January 26th, but I don’t want to start acting normal on a controversial date. The 27th would have been fine, but then on the 28th I have to do a dinner with five-plus people and I won’t be able to be normal on that day since I don’t usually go out in a group.

What this means is that I will be a productive and capable member of society and also clean up the kitchen at least once a day and not check whether I dropped a USB stick with my GAAAAAAAAAAY sci-fi fantasy adventure-romance epic on it in the elevator (I did drop it once while I was pulling my keys out, but I noticed and picked it up super quick) a thousand times and forget about making sure I have cooking oil, et cetera. I will also start releasing sick tracks, vids, blog posts, stories, other things on the semi-regular and participate to a greater degree in human interaction (face-to-face + digital). This is a binding contract and if I don’t start being normal from January 29th there will be serious consequences (for me, not you).

I would also like to take this opportunity to apologise to the rat-mouse from my previous post. In that somewhat impulsive entry, I claimed that the mouse (who may be a rat) was 100% evil, like a rat. I would like it to be known that I don’t believe anyone is 100% evil, but I thought it would be okay to exaggerate for comic effect because it’s just a mouse (rat) and it’s not like I called him by his real name. However, turns out I still feel bad and I would like to retract my statement. It’s much more likely that the mouse-rat who ate a three-finger hole in my comfy red underwear is actually only about 30% evil and just had a really bad day and maybe grew up in a hoarder house with his grandpa (who had some bad experiences during a civil war) so he feels like he has to eat all my clothes even when there’s plenty of other stuff to eat and it’s fine.

We all just want to be loved and accepted!

My mum still doesn’t know what the mouse-rat did but she bought me a rooster calendar for my new place and I opened it today, even though it arrived three days ago. I couldn’t open it before because the place wasn’t tidy enough, even though I was excited about it. There’s still stuff everywhere but it’s just tidy enough to open the calendar and maybe I need to stop being a self-enabler anyway. One thing is for sure though: this rooster calendar was WORTH THE WAIT! 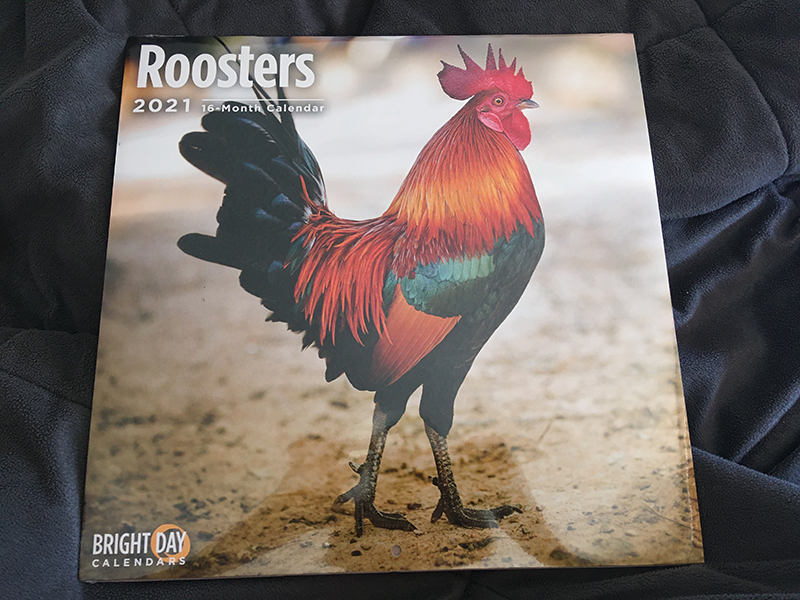 This is by far the best rooster calendar I’ve ever seen. First of all, the attention to detail is impressive. January is the first (earliest) month of the year, and the rooster for January is crowing—because roosters crow EARLY in the day. It’s like the rooster is saying, “Wake up! It’s a brand new year and you’d better start acting normal, haha!” 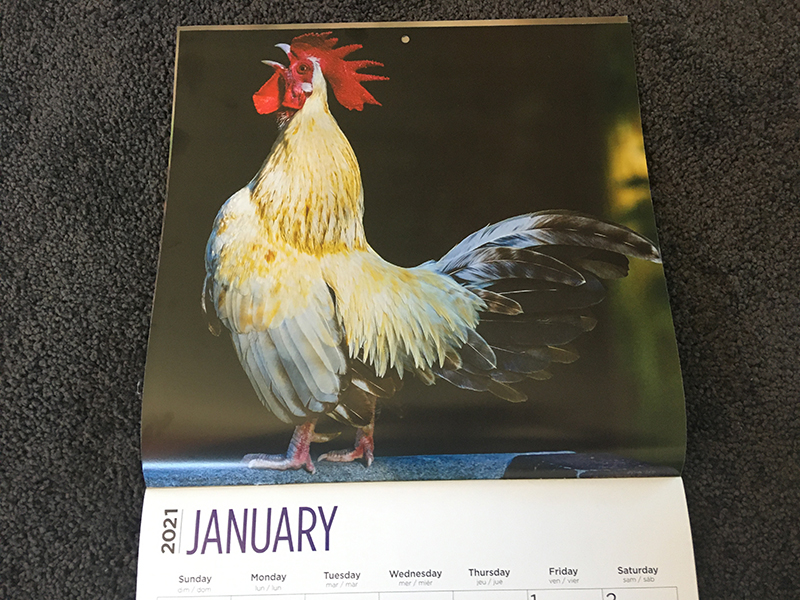 Second of all, I’m delighted by the fact that my rooster calendar “boasts a modern and stylish grid design”. This is something I can’t wait to show off to visitors, except I won’t have any visitors, and I don’t want any visitors. But IF I DID have visitors, I know they’d be just as impressed as me. 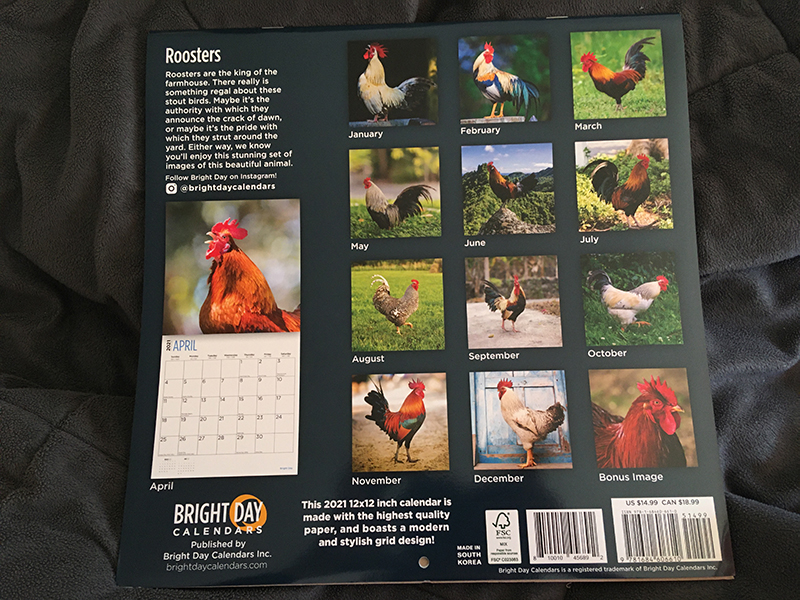 Lastly, I’m so happy about the fact that this rooster calendar goes above and beyond, not just giving me a rooster picture for each month but also a BONUS IMAGE which I can look at AT any time (it’s best not to look at a rooster picture for a given month before that month has arrived, which is kind of frustrating).

But since it’s January, I can safely show off the January Rooster along with the Bonus Roost. I think it’s also okay to show the back of the calendar, which provides a small preview of all the upcoming roosters. 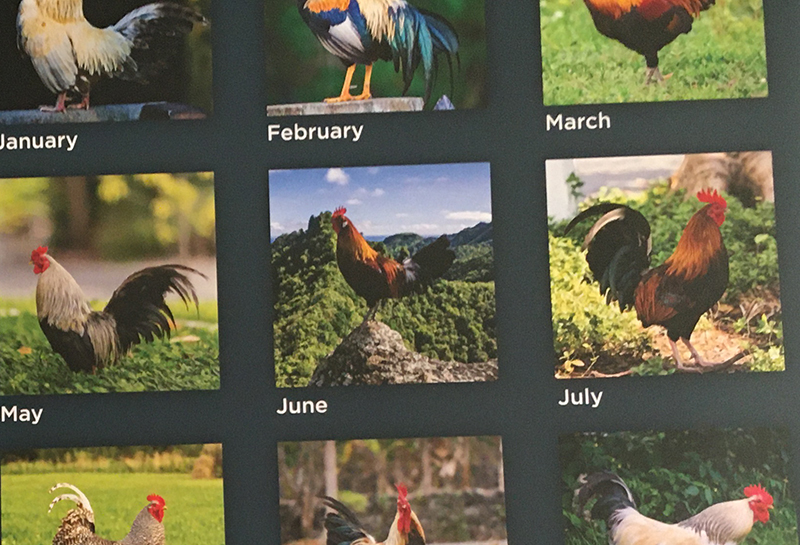 In order to confirm the fact that I’ll start being normal from the 29th of January, I have written “START BEING NORMAL!” on the calendar in the appropriate box. I did this with my favourite black pen, so there’s no way I can rub it out or change my mind. Fingers crossed that I don’t disappoint myself again, hahaha. 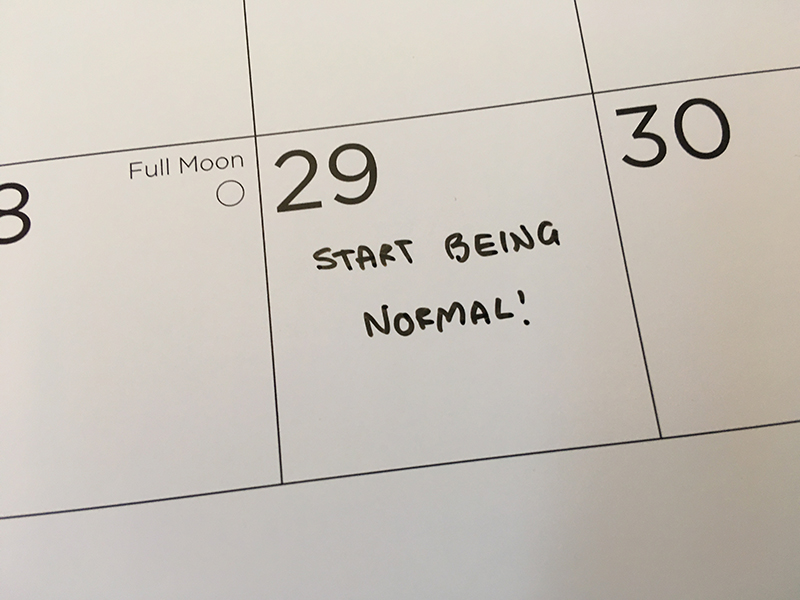