I Went to Another Place (And It Was Full of Roos!)

I went to a place called Canberra, which is the capital city of a really big place called Australia. I lot of people make fun of Canberra for being small and boring but Kmart stays open all night which is pretty neat if you want to buy 50c packets of orange creams at 3am because you forgot to eat dinner. Another cool thing about Canberra is that many suburbs have large pockets of nature and there are heaps of animals in that nature.

One of the best animals in Canberra is the kangaroo. Canberra is so full of kangaroos they should have called it “Kangerra” or “Canberroo.” These fellas were hanging around in some random nature in a suburb called Yarralumla, where we went to play mini golf (I suppose we were playing on hard mode, because the course was covered in tiny gumnuts). 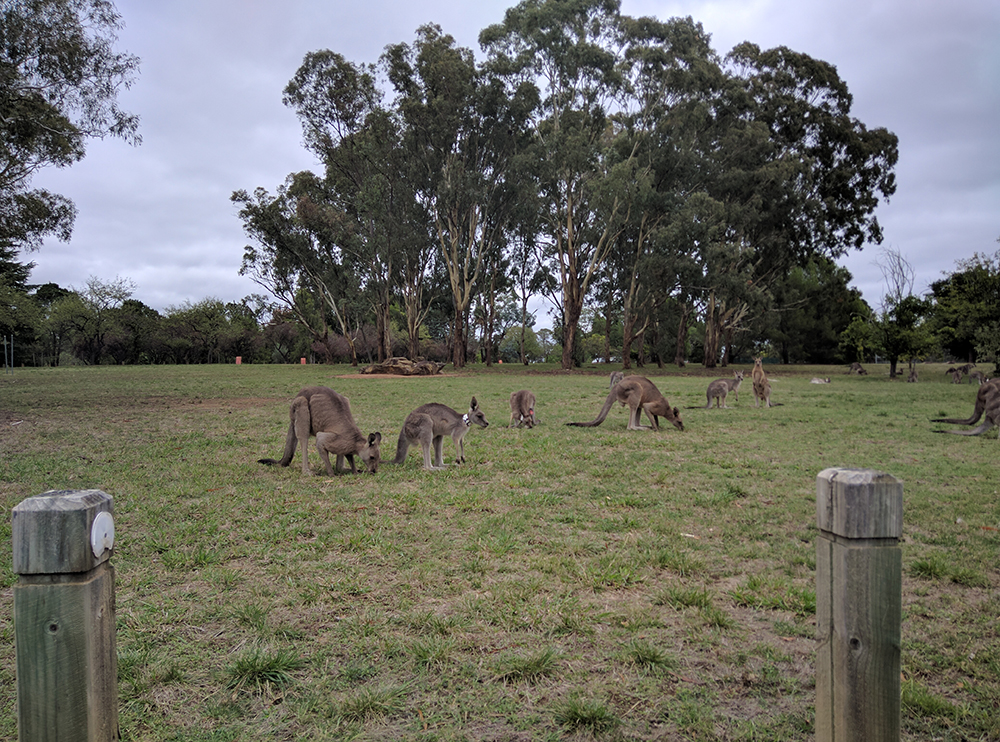 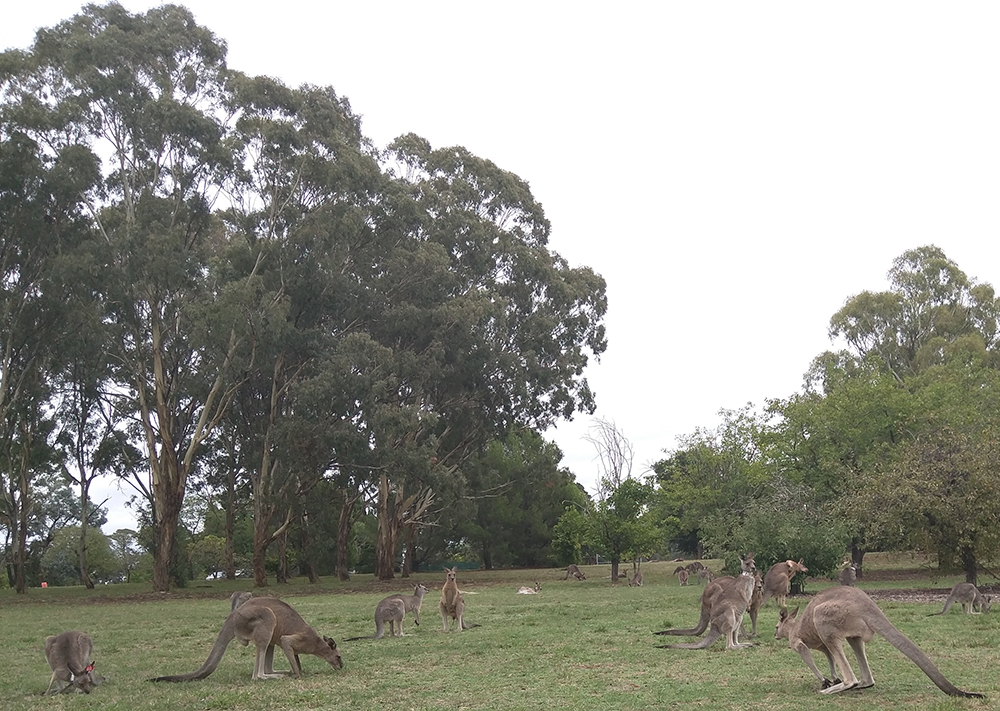 On the way back from mini golf (I must have won because I had the highest score!), we saw in the distance a whole bunch of roos having their communal afternoon chillax/nap. They all lay on their sides like in I, Claudius and I wanted to lie there with them and have a nice afternoon snooze. 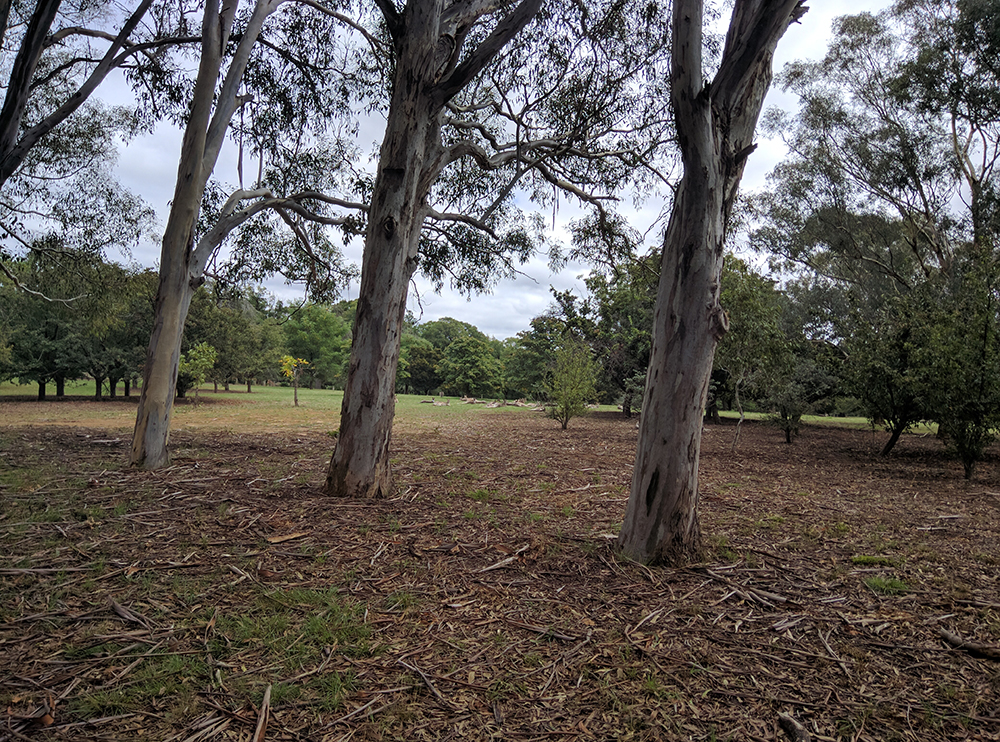 Of course, I had to get closer than that. 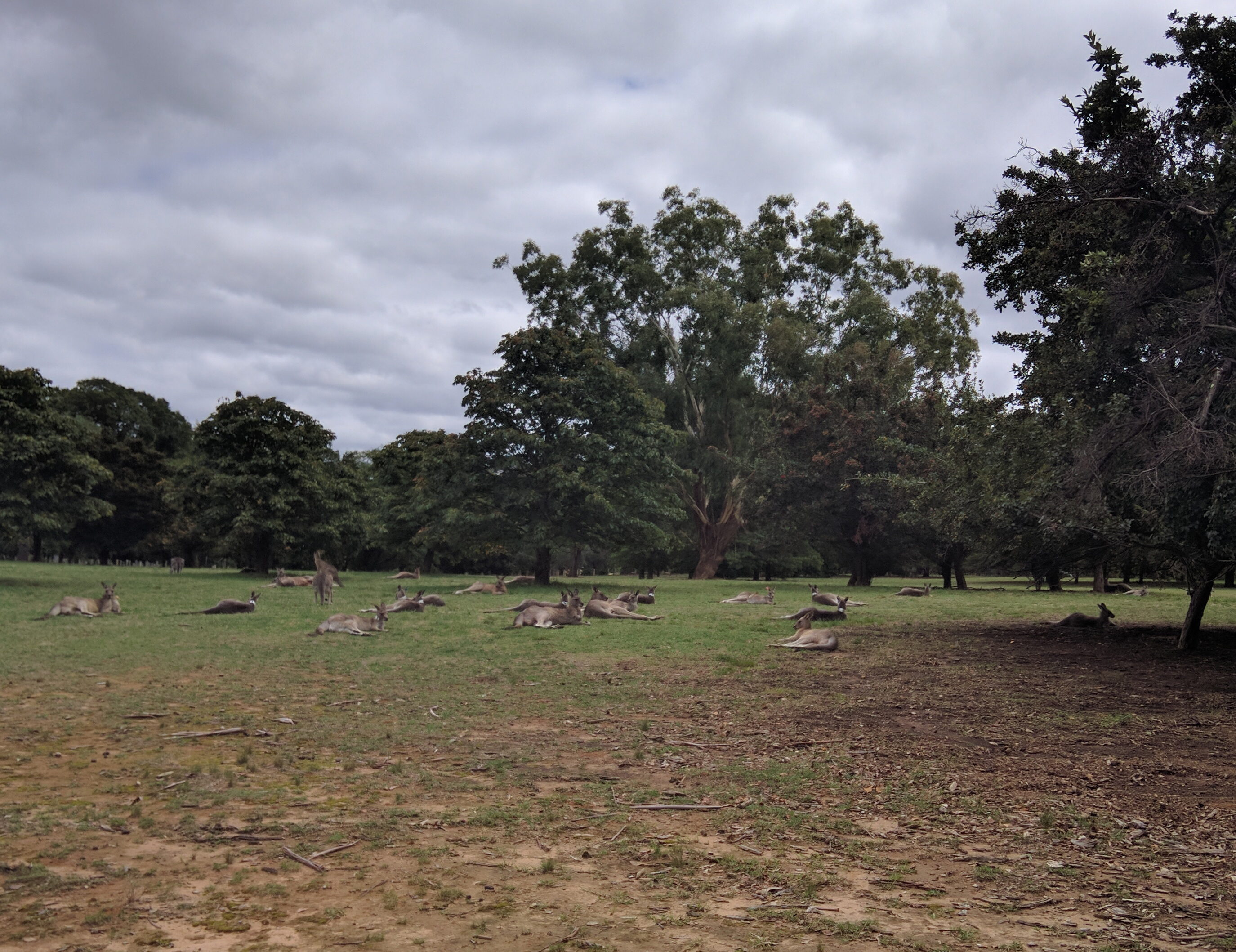 Still too far. Let’s get a zoom on those roos! 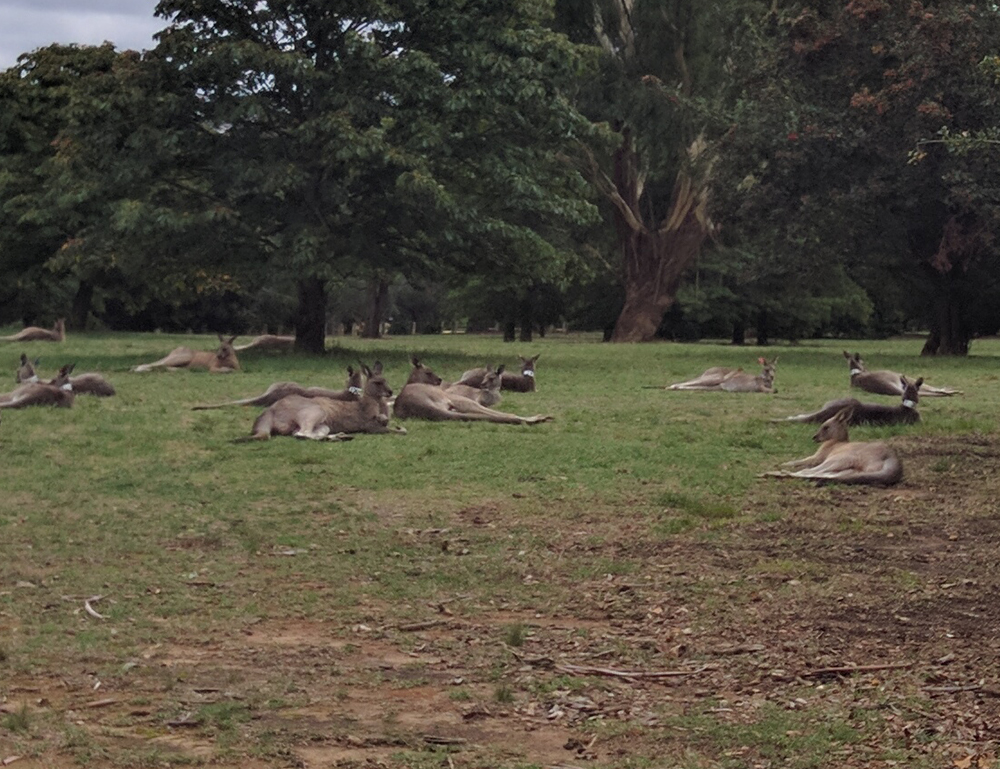 Just look at all those champs! They’re having a great time.

But for some reason one kanga decided to have a nap all on his own. I thought he might be lonely, but I figured I shouldn’t walk too close in case he went nuts and tried to kick me in the teeth. 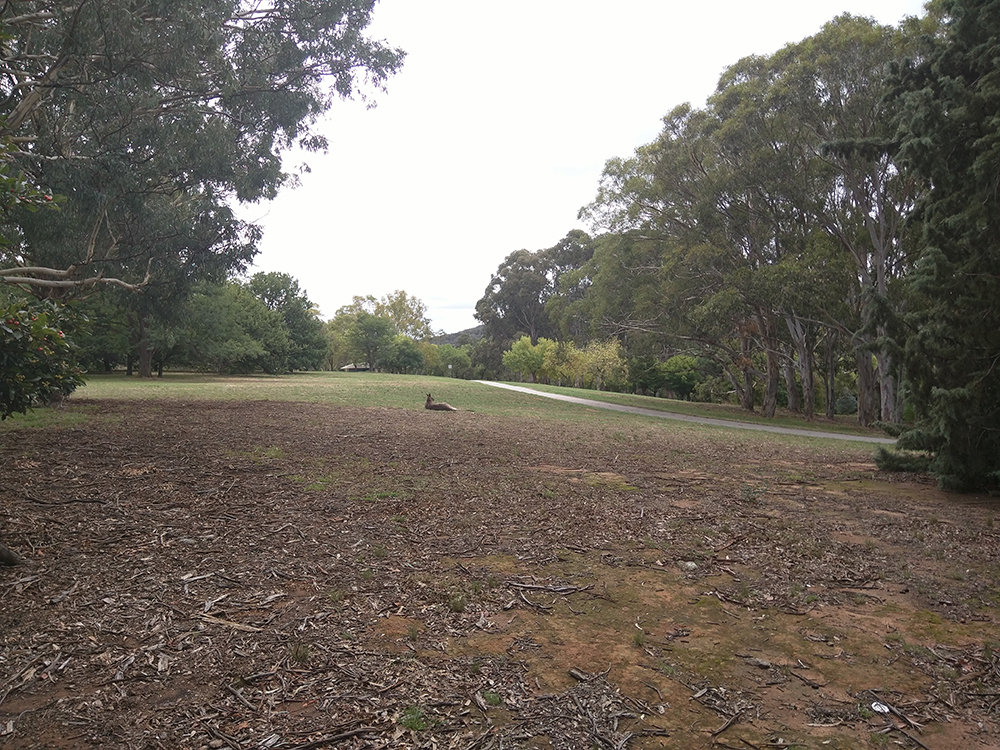 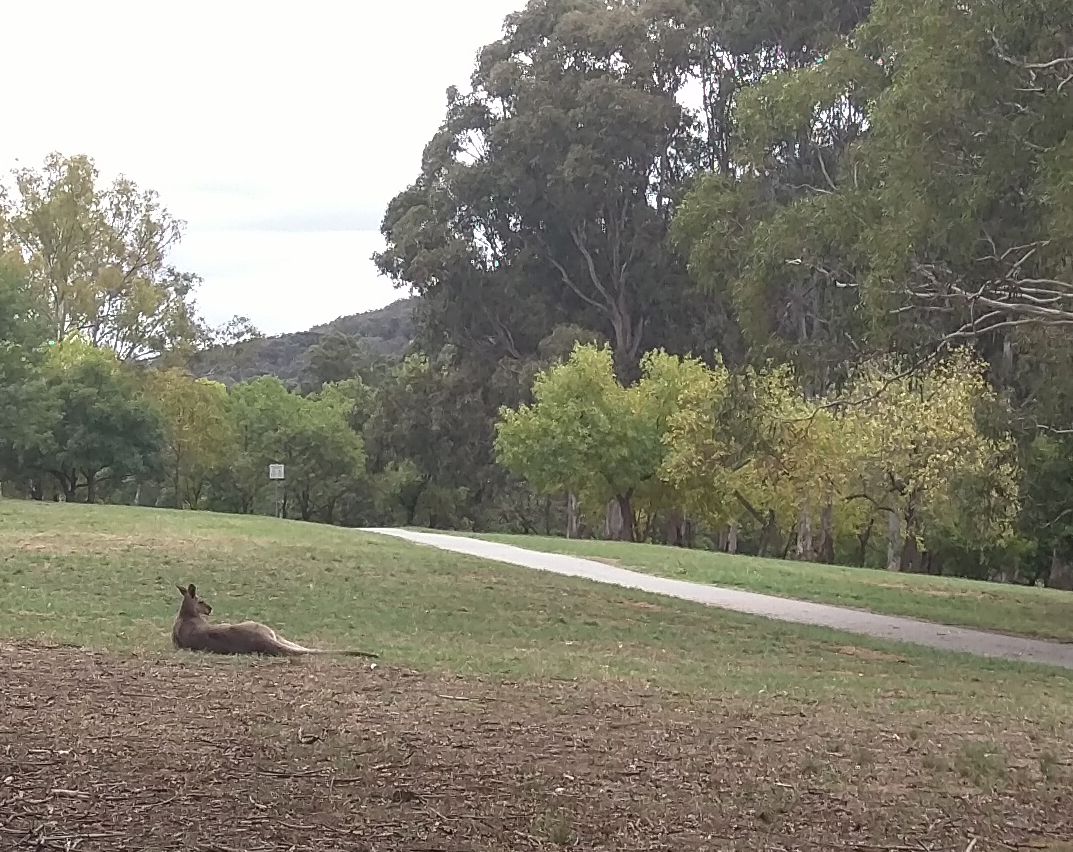 What is this roo about? Maybe he gets night terrors (or nap terrors) and wakes up screaming and he didn’t want the other roos to witness that. Or maybe he hates the sound of the other roos snoring. Or maybe he has social anxiety and finds it easier to spend time by himself. Maybe because of his anxiety he did something stupid and the other roos judged him because they don’t really understand why he behaved the way he did, but really they should be supportive just in case he has thoughts about hopping in front of a Woolworths truck.

Maybe he was contemplating that right as I took the picture.

Now that I think about it, you do see a lot of squished kangaroos on the roads in and around Canberra. There must be a lot of kangas thinking bad thoughts and jumping in front of trucks! If only the government could implement some kind of Kangaroo Acceptance and Commitment Therapy Australia Scheme (or KACTAS for short) so that these poor roos stay off the roads. I just want all the roos to be happy!