The whale toy was a bath toy and you could squirt water out of the whale-hole. The whale toy was super realistic in general and even had barnacles. Aside from being tiny, I’d say it was pretty much a real whale. It was plastic though and not made of actual whale material (blubber and so on). My dad ate whale blubber once and thought it was disgusting but when his hosts asked him if he wanted some more he said yes because he was too polite and that explains a lot.

The kind of whale was a humpback, I think. Or it may have been a blue whale. It was a whale with the stripes underneath. If I type “whale toy” into amazon.com.au I get some interesting results but none of them are exactly like my whale toy from when I was five. I don’t want a “cutesie” stylised whale that looks more like a fat tadpole. 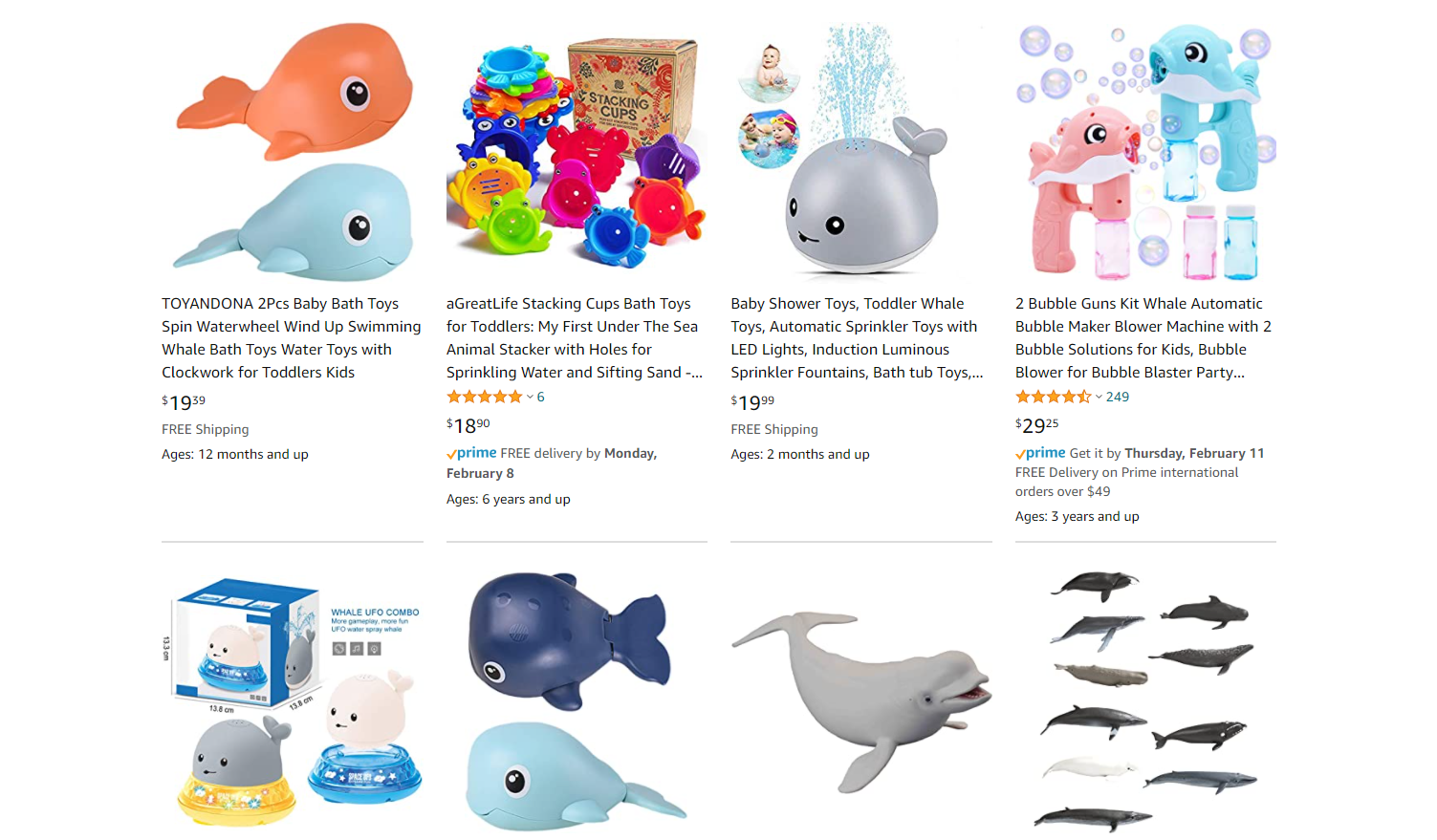 What’s the point of having a whale toy if it doesn’t look like a whale? What is this modern obsession with erasing imperfections/barnacles? I just need a whale toy that’s exactly the same in every way as my whale toy from when I was five.

I might watch The Little Mermaid again soon and see if that helps. I had an emotional attraction to Sebastian the crab when I was five and I’m not ashamed of that. I am a bit ashamed that I just googled “Sebastian the crab MBTI” though. He’s an ISTJ.

Just like how I’m NOT ashamed of my emotional attraction to Sebastian the crab when I was five, I’m also not ashamed of playing with whale toys in the bath at my age. Shame is an emotion that pervades our society and is making us sick. It has become normalised to shame people for everything from body image to how well they can control their emotions to whether they have ever eaten KFC to how they spend their time on the weekend.

And while we’re being casually shamed from every direction, nobody’s allowed to talk about it because shame is a shameful emotion to have and MUST mean you’re bad/ugly/stupid/et cetera. So we all just walk around pretending not to be ashamed about stuff, and guess what? That can make you behave in a really not ideal way. So instead of hiding shame you should bring it out into the open (even just to yourself) and watch it die because it actually dies pretty fast quite a lot of the time.

Most people don’t know about this because it’s a big ol’ secret. But if you’re already doing that, great work!

In the end, anyone who is 25-105 could AND SHOULD play with a whale toy in their new bubble bath. It’s healthy for your mind and I can almost guarantee you will live longer. When I’m 45 I’ll be exactly the same as when I was five and that’s how it should be. I’m not even going to worry about the fact that I’m switching between spelling numbers and typing the numeral because that’s how far I’ve come.

THERE’S NO SHAME IN BEING SLIGHTLY INCONSISTENT ABOUT TRIVIAL THINGS!

People should probably maybe also try to take the Middle Path (am I using this right?) with grown-up things like divorce (even just typing the word “divorce” makes me feel about twelve and like I shouldn’t be typing that word because that’s for grown-ups to talk about). Probably the perfect thing to say when you get divorced is: “Okay, sorry we can’t sit on the couch and eat Jatz anymore. How about you keep your stuff and I keep my stuff and don’t forget you can still eat Jatz on your own. I will send you a hand-carved wooden sculpture in the mail once a month for five years—not in a crazy ex-girlfriend kind of way but in a ‘I’m not going to stop caring about you after 25 years just because we’re divorced’ friendly-nonverbal-acknowledgement kind of way. And in return you can text me the odd emoji so that I know you don’t hate me. But if you get a new wife and she doesn’t like the sculptures I’ll stop sending them because I don’t want to make her mad/get you into unnecessary trouble.”

That would be way easier than the stories I hear.

As much as I don’t really like children that much, I do appreciate how free they are. Everything was perfect when I was five except when mum thought I had Tourette’s because I wouldn’t stop swearing but I was just copying my brothers and had other issues. I was a tomboy who didn’t wear a shirt and now I’m a tomboy again but I do wear a shirt. I had a bath then and now I have a bath again. I had a whale toy and soon I’ll have a whale toy again because I ordered this one from amazon.com.au:

When my whale toy arrives I’ll post pics/vids in the bath but with clothes. I might tell this girl/lady (it’s hard to say “lady” because I feel about sixteen, but I know it can be rude to say “girl”) who loves sharks but I might not, since whales aren’t sharks and you never know if someone might judge you for buying a whale toy even if they love sharks. Not that it matters because you should not be ashamed of anything ever (maybe that’s slightly too extreme but you get the idea)

It’s better to feel guilt than shame because guilt is like “that thing I did was bad/not ideal” and shame is like “I AM BAD” and those are two totally different things, you know? It’s okay to feel guilt sometimes because it gives you some direction but be careful you don’t feel guilt when you didn’t do anything bad because that can happen too sometimes/a lot. Like sometimes I feel guilty if I imagine one of my characters doing something he would never actually do but I mean I’m just figuring out the possibilities and in the end he’s not real so it’s fine. And even if he WAS real, you can actually imagine whatever you want and it doesn’t harm anyone so it’s fine either way :)

The good news is that despite my whale regression I’m almost 100% normal. I know I said I would already be 100% normal by January 29 but that was a bit unrealistic! You see, I have to remove the thorns from inside of me and it’s a delicate process that needs a lot of time and space because it’s hard and might cause problems. But the other good news is: once I’ve removed all the thorns, I won’t have to worry about anything touching them and causing me pain and so I will be able to be free and 100% normal and not avoid everything/follow all these rules that are designed to protect the thorns from being bumped but actually make everything worse.

Thanks for reading about my regression whale/self-help journey. Don’t forget to play with your own regression whale in the bath and also help yourself when required. It’s fine and PREFERABLE to do that. Hopefully that makes sense and is good (or not bad) advice.